Relative and absolute paths in Linux

Paths is a topic that causes a lot of confusion for people that want to learn how to make use of the command line in Linux. In this post I will explain what paths are, and the difference between absolute and relative paths. By the end of this post you should be able to understand the diagram below. 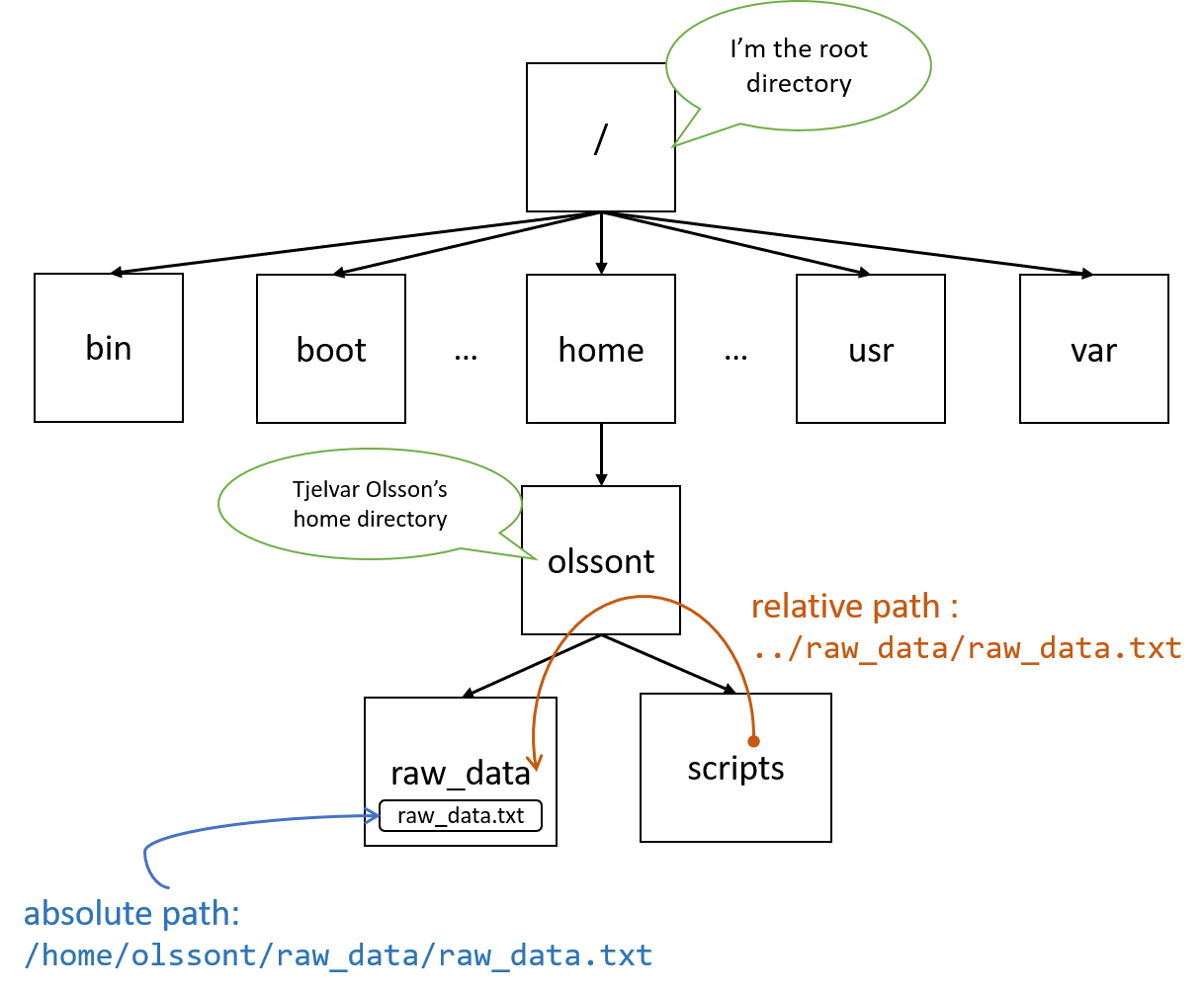 The term “path” refers to the name of a file or directory that can be used to uniquely identify it in the file system. For example, the command pwd prints the name of the current working directory, in this case my home directory.

In the above /home/olssont is the path to the directory that I am currently in. To illustrate this further we can create a file in this directory. The command below creates a file named raw_data.txt.

We can see the files in the working directory using the command ls.

Depending on how many files you have in your working directory you may see more output from the command above.

To print the content of the file one can use the command cat.

In the above the text raw_data.txt could be used to find the file that we just created. This was because the file was present in the working directory.

So how can we refer to a file if it is not present in the working directory? This is where the use of absolute and relative paths comes into play.

To illustrate this we will use the command mkdir to create a new directory called raw_data.

Then we will use the command mv to move the file into that directory.

Before illustrating the correct way to refer to the file let us see what happens if we use the same command as previously.

The cat command is no longer able to find the file (or rather the file is no longer there, because we moved it into the raw_data directory). There are two methods that you could use to refer to the file in the raw_data directory. The first is to use the absolute path, in this case /home/olssont/raw_data/raw_data.txt. Note that the absolute path to your file will be different if your username is different to mine and/or if you are not working in your home directory.

The second method is to make use of a relative path, that means a path that is relative to your current working directory, in this case raw_data/raw_data.txt. The forward slash (/) is the symbol used to separate directories and files.

To illustrate the concept of relative paths further we will create another directory called scripts.

Now we will change our working directory to be scripts using the cd (change directory) command.

Let us see what happens if we run the previous cat command again (you should be able to get back to this by using the up and down arrows on your keyboard to navigate through the command line history).

The command above fails because it expects to be able to find a directory named raw_data in the current working directory and because we have moved into the scripts directory there is no such directory.

This should be enough to get you started with paths in the Linux command line. In the next post I will show how relative paths can be used to make scripts more portable, and how they can be used to improve your data management.